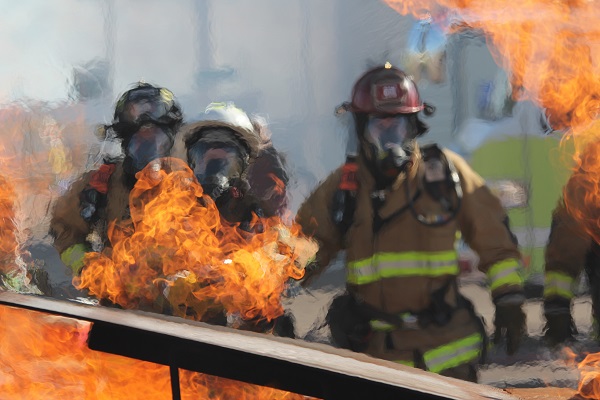 The destruction of a warehouse by fire has a number of consequences that most owners and managers of this type of facility have never thought about. Is it possible to prepare for them to minimize their negative effects? For some of them, certainly.

One of the most popular opinions in the commercial leasing market in recent years has been that, while the market for retail facilities has been short of breath and started a fierce battle for keeping customers with the growing e-commerce industry, the market for storage facilities has heated up. Of course, behind this formulation is the huge popularity of this type of facility among tenants and the growing number of new logistics parks. However, what if a warehouse facility really does heat up, i.e. a fire breaks out or even destroys all or part of it? The recent past has shown that, despite the use of a number of fire protection systems in warehouses, fires in this type of facility do occur, and they are not isolated incidents.

Our practice and experience in recent years have led to the conclusion that, while a fire itself cannot be predicted, prior reflection on the broader issues of fire safety of a facility and potential post-fire scenarios can make a significant contribution to minimizing damage and restoring a storage facility to full functionality in the shortest possible time.

Fire outbreak – from ignition to ruins

The outbreak of a fire itself is usually completely outside the decision-making process of the building owner and manager. The notification of the emergency services is also completely automatic, due to modern fire protection systems. But what happens after a fire has broken out, what are the possible consequences of a fire, and what can the owner and manager expect from a fire?

A key stage that will fundamentally affect the further fate of the entire building and the factual and legal situation of its owner is the firefighting operation carried out by the fire brigade. There are no exceptions in this respect – the relevant services are responsible for its execution and one must submit to their instructions. On the other hand, active cooperation during the extinguishing action on the part of the owner and the storage facility management is expected by all means, and its absence may have negative consequences. We should remember that, depending on the size of the fire, the size of the facility, the specificity of the items stored by the tenants, the rescue services will need access to plans of the facility, current information, and possibly also active participation of representatives of the owner or manager, e.g. in terms of assistance in emptying some of the premises, carrying out certain demolition works or even providing access to social rooms for people taking part in the firefighting operation.

The above actions are extremely important for two reasons. Their proper execution obviously contributes to the quickest possible extinguishing of the fire and completion of the firefighting action, thus minimizing the damage. In addition, proper co-operation with the emergency services distances the representatives of the building owner or manager from the prospect of criminal liability, and it should be remembered that the causes of the fire will be investigated by the fire brigade and, in the case of some fires, also by law enforcement authorities.

The characters in the drama – the leading roles are already cast

With a high degree of probability, it can be indicated that the number of entities with whom the facility owner and manager will cooperate during the restoration of the storage facility to full functionality is known in advance. They are: fire brigade, building supervisory authorities, tenants, insurers, law enforcement authorities, demolition and construction contractors.

It should be borne in mind that, in principle, each of the above entities will present different interests, which will often be mutually exclusive. Conflicts that are bound to arise include, on the one hand, the insurer’s and tenants’ desire to restore the facility to full use as quickly as possible in order to limit damage while the facility is still unsafe and, on the other hand, the need for the fire brigade and building supervision inspector to ensure that the facility is safe for use. In addition, the entirety of these activities will be watched by the law enforcement authorities, who will seek to establish the cause of the fire.

What actions should be taken by the owner and manager of the facility?

Proper supervision of the technical condition of the facility is a basic requirement expected of the owner and manager of the facility. This includes fire protection systems in particular, but also the control of tenant activity on the premises, i.e. verifying that the tenants’ use of the premises does not adversely affect the safety of the building.

In this respect, it is important not only to comply with the fire safety standards themselves and to carry out the required inspections, but also to carefully collect and store all documentation relating to fire safety. In the event of a fire outbreak, both the fire brigade and law enforcement authorities will demand access to all of the documentation in question, so it is good that it is diligently maintained.

As for the actions to be taken by the owner and manager of the facility once the fire has broken out, been extinguished and the facility has started to be restored to its functional state, then although these will mainly focus on factual actions – verifying the damage after the fire, carrying out the relevant inspections and sometimes demolishing and rebuilding the facility– the whole thing requires due consideration from a legal point of view. In particular, let us remember that taking a warehouse out of use and the period of restoring it to full functionality takes time and in itself generates a claim by various entities. It is therefore important for the facility owner to pay attention to these claims and think of them as potential court disputes.

For example there should be highlighted the required cooperation with insurers, who will largely pay claims from various insurance policies. Also the facility owner’s policy. In addition, informing tenants of the current state of affairs and looking after their interests as well, indirectly contributes to reducing the damage on the part of the owner of the storage facility.

In the above regard, good practices can be:

1. responding to correspondence from those affected by the fire on an ongoing basis;
2. carrying out any activities on the burned area after arrangements have been made with the building supervisory authority and the prosecutor’s office;
3. providing your own insurer with any information that may be relevant from the perspective of funds due under the insurance policy;
4. confirming actions that sought to minimize the damage, for example, by keeping arrangements in writing or through email correspondence.

In the whole matter of the unfavorable situation that is associated with the fire in the storage facility, small claims are sometimes neglected. In the meantime, any claim may ultimately find its finale in court, and practice shows that court proceedings are getting longer and more complicated. It is therefore worth taking steps to avoid litigation and, where this is not possible, to build up own claim accordingly, also by proving that the dispute occurred through no fault of our own.

The text was authored by Emil Zalewski and Maciej Zawisza. The article appeared in Eurologistics magazine on 9 August 2022.